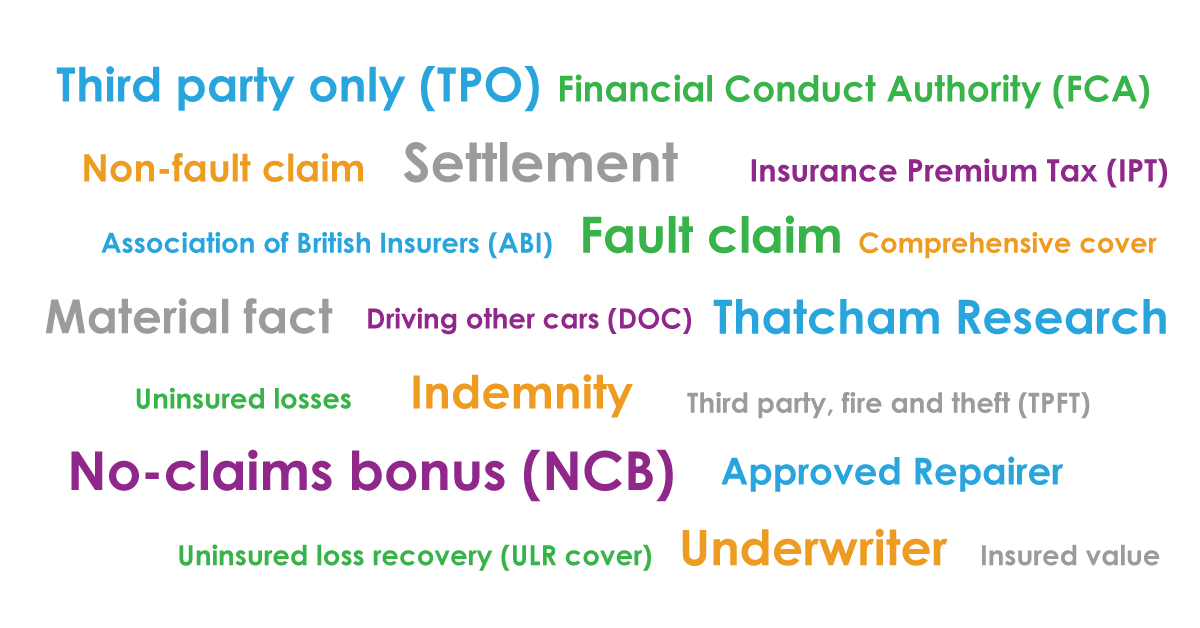 Does the car insurance jargon put you off searching for the best deal when it comes to buying car finance? Take a look below for the list of commonly used terms that you will come across when looking to purchase car insurance.

Many insurance companies are members of the ABI, but membership is not compulsory and the ABI is not a regulatory body. ABI members sit on the Group Rating Panel, which recommends the car insurance group rating for each new model built to a UK specification.

The highest level of car insurance cover, which usually covers you for:

Please note that policy features will vary between insurers, so always check them before you buy.
Compare with third party only cover

Many insurers don’t offer this as a standard policy feature, so make sure you’re covered before getting behind the wheel of someone else’s car. It’s also worth noting that when it is included, you usually only get third party only cover.

An accident or loss where you are considered to be to blame, or where you or your insurance company cannot recover costs from somebody else.
Remember, if your car is hit while parked, by someone who cannot be traced, this counts as a fault claim.

With a non-fault claim your insurer is able to recover the cost of the claim from someone else.

The total amount the insurance company will pay out for your car if it’s damaged beyond repair. This will either be the amount you stated the vehicle was worth when taking out the policy, or the current market value at the time of the claim – whichever is lower.

For each year you drive without making a claim on your insurance you get a year’s no-claims bonus, subject to a maximum. This bonus reduces the cost of your car insurance premium for the following year. Also described as a no-claims discount (NCD).

What your insurer pays out for a claim.

The Motor Insurance Repair Research Centre (Thatcham Research) carries out research for the motor insurance industry on the cost of car repairs and vehicle security. The Group Rating Panel, which meets to assign new car models to an insurance group, is administered by Thatcham Research on behalf of the Association of British Insurers.

Third party cover is the minimum level of car insurance cover required by law and contains no cover for damage to your vehicle. It usually covers your legal liability for:

Third party fire and theft cover provides the same level of cover as third party cover, but protects you against damage to your vehicle from fire, or theft of the vehicle, as long as you’re not at fault.

Any losses not covered by your insurance policy, such as your policy excess, any out-of-pocket expenses following an accident, eg a loss of earnings, or compensation for an injury suffered in an accident.

The assistance in recovering your uninsured losses from a third party, where an accident is the third party’s fault.

An underwriter decides whether to accept you as an insurance risk and then calculates your car insurance premium.