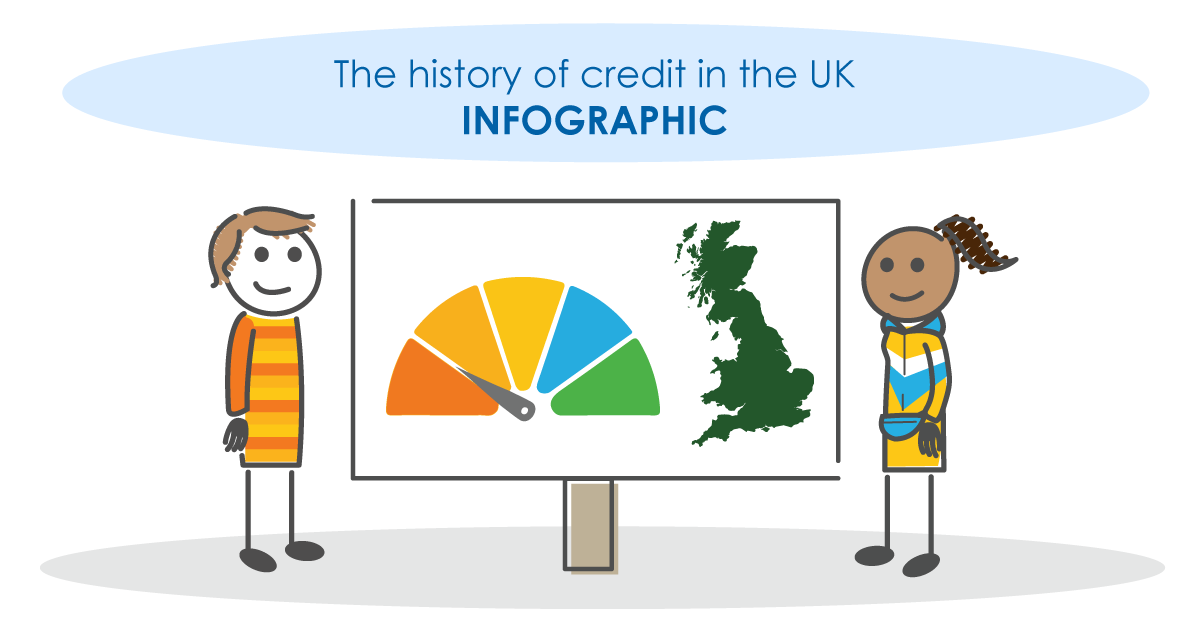 What type of bad credit do you have?

How do lenders use my credit information?

Have you ever wondered how credit started in the UK and how different it is today compared to the past?, we have put together this quick visual overview to give you an insight into how credit developed in the UK, some times were harder with consequences for non-payment of credit.

Other times lenders were more relaxed in who could borrow and how much – you will see in the infographic below, how this has led to the stricter criteria, careful lending and limits we are subject to today.

Credit reporting in the UK started as long ago as 1803, when a group of London tailors began swapping information on customers who failed to pay their debts.

Credit was given based on a person’s social status within the community, assets, and income. Getting into debt was seen as a “moral” failure at the time.

When times were hard during the Victorian years, there were many people who used credit or pawned items such as clothes to get money to pay for their food, and then paid it back with interest.

Debt was seen as a crime, and those who ended up in a debtor’s prison had to pay for their keep and work until they or their family paid off the debt.

Debtors prisons were bought to an end in 1869.

In the 1970’s credit was mostly supplied through banks in the form of personal loans and overdrafts, while mortgages were secured from building societies.

Credit cards and store cards were only just starting to emerge in the UK.

It was expected that borrowers had one bank for their loans and one building society for their mortgage.

In 1973 Barclays began actively promoting their credit cards to women.

Before this time, women were seen as a high credit risk, and if they wanted a credit card or loan, they had to get their father or husband to sign as a guarantor, even if they earned more than them.

In the 1980’s, the deregulation of banking happened in the UK, which meant banks could have a greater level of self-authority and risk in lending.

The consequences of UK banking deregulation can be seen all over the world, but nowhere more so than the UK.

Deregulation led to policies which pushed for aggressive growth.

In the 1980’s and 1990’s most of the largest building societies converted into banks and the others were acquired by existing banks.

By the 2000’s it was common for households to have credit from multiple lenders.

This led to greater competition such as promoting and offering interest free credit cards and higher lends, to attract customers.

Resulting debts and loans including sub-prime (bad credit) mortgages were combined into CDOs (‘collateralised debt obligations’) which banks and investors traded with each other.

The 2007 credit crunch was started by millions of homeowners defaulting on their sub-prime mortgages in the US, which included a very low interest for the first 1-2 years of the mortgage. The CDO’s that relied on sub-prime mortgage income decreased in value.

As interest rates went higher due to inflation, people found they could not afford their increased sub-prime mortgages repayments any more on top of rising food and petrol prices.

This led to a shortage of funds for other financial lenders around the world.

As a result, high risk and 100% mortgages in the UK stopped and mortgages in general became more expensive and harder to get.

What type of bad credit do you have?

How do lenders use my credit information?