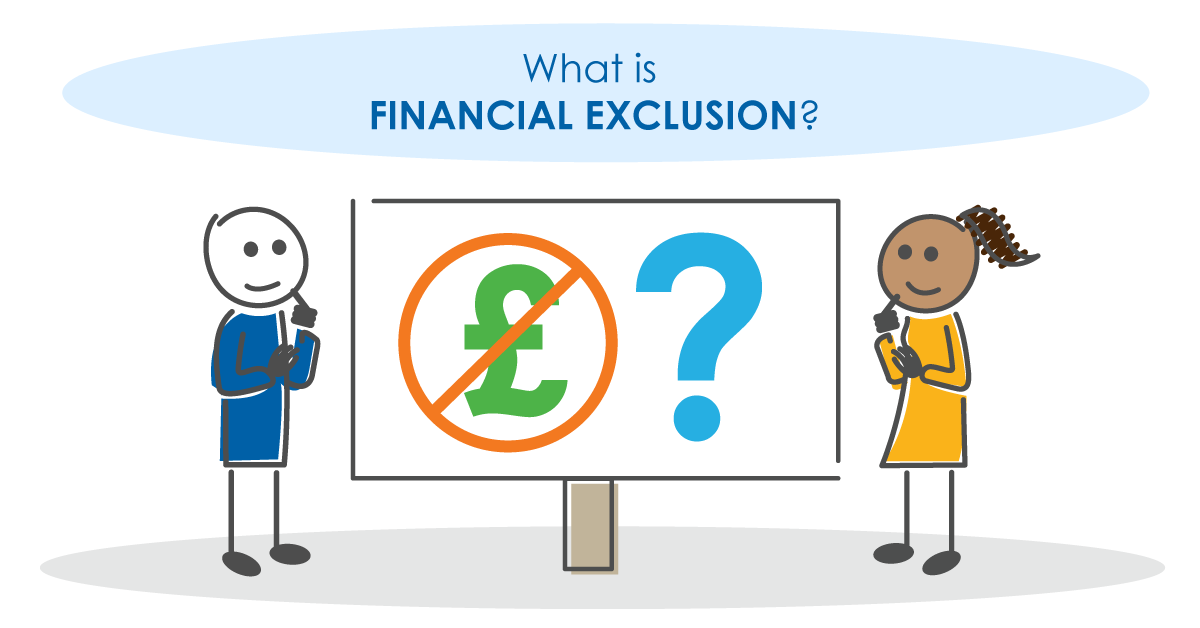 Financial exclusion is a way to describe someone who has either the inability to access credit or is having difficulty accessing mainstream financial services such as a bank account or loan due to a range of circumstances.

In this article, we will be focusing on the impact to those who are financially excluded from obtaining credit from mainstream lenders.

There are many potential reasons for being financially excluded from mainstream credit. This can range from having a poor credit history, no credit history, or the type of income you may be receiving at the time of your application.

What is a mainstream credit lender?

A mainstream lender or credit provider are financial institutions such as a bank who usually offer low interest products such as loans or credit cards.

Mainstream lenders who offer lower interest rates on their products are less willing than specialist lenders to take on applicants they deem a higher risk for defaulting on their credit repayments. This could be due to a bad credit history or that their specific lending criteria excludes the potential customer from the start.

What is a specialist credit lender?

Go Car Credit for example are a lender that could offer bad credit car finance to those who may have been excluded by mainstream lenders due to a range of reasons.

What is the impact of being financially excluded?

A person who is financially excluded could have very limited or no access to low interest credit products such as a loan from a mainstream lender.

If someone is financially excluded it could mean that their utility costs are higher, and they could only get credit with a higher interest rate if there are no other options such as having a guarantor.

Not having access to any credit at all could lead to not being able to start building a history.

Why are people with bad credit excluded by mainstream lenders?

Missing repayments or defaulting on credit repayments originally obtained from mainstream lenders or even missing payments for utility bills and not realising the impact it would have on future requests for credit could contribute to bad credit.

These are all documented in your credit history, but once you have bad credit and want to start improving your credit, you will find your options very limited.

Who else could be excluded from mainstream credit?

It is not just people with a bad credit that could be refused finance by mainstream lenders potentially due to their lending criteria, here are a few examples of why someone may not be successful in obtaining a loan:

Young people as they may not have established a credit record and may be less experienced with managing credit commitments or may not be financially capable yet. Statistics from a YouGov study in 2016 show that 37% of 18 to 24-year-olds included in the study did not have plans to pay back their debts. Lenders past data and other published reports based on this age group could be contributing to them being perceived as a higher risk for credit in general.

Those who have a low income could be excluded from mainstream finance due to the increased risk of their credit repayments becoming unmanageable if they have unexpected essential expenses arise.

People who are currently unemployed or those who receive certain benefits could have that benefits income excluded by mainstream lenders which may lead to not having a minimum income that meets their minimum income criteria.

The Self employed could be excluded by mainstream credit providers due to fluctuating income from month to month, which could be more difficult for a lender to assess their ability to make a fixed repayment. Research carried out by Citizens advice found that 29% of the self-employed people they interviewed suspected or even knew that they were turned down for credit due to being self-employed.

Those with no credit history may be perceived as a higher risk for mainstream lenders due to the uncertainty of how the person will manage a credit commitment.

What helps a lender decide whether to give credit?

The data that the applicant provides in an application form or from a credit report is analysed when lenders are making their decision.

Creditworthiness and risk: A credit history will provide information such as defaults and arrears on previous credit commitments, which are the main identifiers of the applicant’s responsibility to pay back the credit.

Affordability: All responsible lenders should assess whether a person can safely afford the repayments and the total amount payable, usually through requesting and analysing income and expenditure.

Reasons for a bad credit history

You could have a bad credit history due to defaulting on credit commitments in the past for a number of reasons, your credit report may only show what you have defaulted on, how many times you defaulted but does not tell a lender why you defaulted.

You may have defaulted due to circumstances beyond your control such as losing your job, just missing or forgetting payments and being unaware of the impact it would have on your credit, or even taking out loans in the past without the lender properly understanding your ability to afford the repayments.

Bad credit lenders have the ability to be more flexible with criteria than mainstream lenders, when taking past defaults into account to make a decision to lend you credit. Unfortunately, they do take a risk as some people do default on their bad credit loans, which means they usually only offer customers a higher interest option.